‘Twas the Night Before Indy (repost for Christmas)

Twas the night before Indy
And all ’round the track
Not an engine was purring
Not even a cat
The race suits were hung
By the helmets with care
In hopes that St. Marmon
Soon would be there

When out on the bricks
I heard such a clatter
I headed down pit lane
To see what’s the matter
In Gasoline Alley
I saw such a sight
’twas the old Marmon Wasp
Like a ghost in the night
With it’s little old driver
His hair turning grey
I knew in a moment
It must be St. Ray

Like Dan Gurney Eagles
The other cars came
He whistled and shouted
And called them by name
Now Offy! Now Novi!
Now Hall’s Chaparral!
Lolas and Marches
McLarens and all!
To the top of the grid
Along the pit wall
Drive away! Drive away!
Drive away all!

And then on a microphone
I heard in the night
A golden-voiced angel
Who brings such delight
Said the Ghost of Tom Carnegie
With a smile on his face:
“500 miles to all
And to all a great race!”

Merry Christmas from IndySoup – see you in 2012!

Life, Death and IndyCar: The Show Must Go On

What if I were to tell you that there is a recurring motoring event in North America that involves drivers with varying skill levels, traveling at top speeds, in huge packs of 100 or more cars going six-wide – and it kills tens of thousands each year? You might say that it should be banned; you might call it an unnecessary bloodsport; you may even call the participants completely insane. But to millions, it’s simply called the daily commute. The prize purse for running this race is a day’s pay, and the trophy girl kiss is a loved one with arms open, or tail wagging, waiting for these “daredevils” to return safely home.

As we re-live the tragic events of October 16, 2011 in the Las Vegas Accident Investigation report, we are reminded that IndyCar is still dangerous and that human life is always fragile, even for top-level professional racers driving some of the safest cars in the world. After the death of Dan Wheldon, the remainder of the race was cancelled, for several reasons, but the demise of a beloved race driver was not the only one. Some veterans like Mario Andretti wanted the race to resume, but in addition to the emotions surrounding the tragedy, the resulting attrition had decided both the series championship as well as the top rookie honors, and, it was the end of the season.

Historically, death has been an acceptable and integral part of the art and craft of auto racing. Three weeks before my life began, the lives of Eddie Sachs and Dave MacDonald came to an end on the second lap of the 1964 Indianapolis 500 mile race. On that day, the track was cleared from broken bodies and charred cars, the racing resumed and a young driver named A.J. Foyt would go on score his second of four eventual Indy 500 wins.

That’s life: you’re born, you live, you die, and then someone else is born to start the cycle over again. And, that’s racing, or at least that’s the way it used to be. Mario won the Monza Grand Prix that took the life of his teammate, Ronnie Peterson. A.J. restarted with the rest of the 1964 field and went on to win. And, the last time an IndyCar driver was killed on track, Paul Dana at Homestead in 2006, his teammates sat out the race, but the race did start as planned. The driver who went on to win that day was Dan Wheldon.

Nowadays, the deaths on track are a rare exception to the rule. We used to be amazed at horrific-looking crashes that would end up with the driver climbing out of the wreckage alive, smiling and waving to the crowd. That has become the new “rule” and perhaps we have been lulled into a sense of security that racing is somehow safe now.

But racing, and the daily commute, unfortunately, will never be 100% safe, but we can do all we can to make both safer for everyone involved. Whether it is under powered and over down-forced open wheel IndyCars jockeying for position on high-banked 1.5 mile ovals such as Texas or Las Vegas, or compact cars, semi trucks and SUV’s slugging it out on South Florida’s I-95 or any number of L.A.’s congested freeways, there will be dangers involved.

Yes, racing is dangerous. And, yes, the daily commute can – and all-too-often does – become deadly. The cars, tracks and highways have been made safer over the years, most often as a response to tragic events, and that trend will continue, to be certain.

But what remains is not the hardware, but the software; people – both racers and commuters – simply need to be better drivers and exercise better judgement. The only criticism about careless driving at the Las Vegas Motor Speedway came from the drivers themselves. “We need to take better care of each other out there,” one was quoted as saying.

And we need to take better care of each other on the highways, freeways and country roads across the land. Let’s use better judgement and not try to multitask in the driver’s seat. Let’s look out for the other guys and girls out there. If another driver cuts you off, simply give them more room and don’t add to the problem by tailgating or resorting to other forms of passive and/or aggressive road rage. If you are running late, so be it. Apologize if you’ve kept others waiting, but no pressing appointment is worth trying to make up lost time on the roadways by driving like a maniac and putting others at risk. As the IndyCar race commentators in the booth are always quick to remind, “Discretion is the better part of valor.”

So use discretion on the track and on our public roads, especially during this Holiday Season when driving conditions may not be the best and the parties may be a bit too merry. 2012 will bring a new and hopefully an even safer car to IndyCar, one that Dan Wheldon helped developed and which carries his initials.

The show must – and will – go on. The daily commute will still go on as well. Let’s just take a moment and put Dan in our minds before we go out and risk our lives and the lives of others on our nation’s motorways.

Life is not a race; we will all drive the final lap and take the twin checkers as we cross the finish line sooner or later. The later the better.

Merry Christmas, Happy New Year and a safe celebration to IndyCar fans everywhere from your friends at IndySoup. We love you and want to see you all at the races next year! 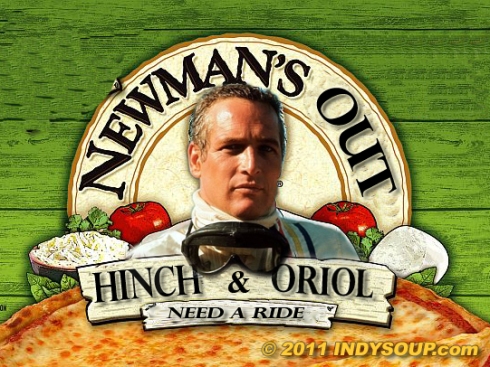